The team has been associated with the Blackfriary project since its beginning. The principal investigators, Finola O’Carroll and Dr. Rachel Scott have been researching and instructing on the site since 2010 and 2012 respectively. The co-director of the field school, Laura Corrway developed her archaeology career at the Blackfriary, starting out as a student. In 2013 both began teaching at the site. The current bioarchaeology supervisors, Nikki Long and Erika McMullin as well as post-excavation supervisor Mark McConnon are former students who have returned to bring their expertise to the team. This combined perspective of academics, researchers and teachers, and former students makes the teaching team unique. All of us are committed to the ethos of the project, to teach students to the highest standards but in a supportive, friendly way while maintaining best practice and ensuring that the learning experience is well-rounded and relevant to the students’ needs.

Dr. Scott/Rachel is a bioarchaeologist and Associate Professor at the Department of Anthropology, DePaul University.

Laura came to Blackfriary as a student in 2010 and has been excavating here every year since then, becoming a member of the teaching staff in 2013. She did her BA and MA in UCD, looking at the DeLacy castle in Carlingford, Co. Louth. She has a research interest in Medieval archaeology, castles in particular and has worked on a number of research excavations and on many commercial ones with consultancy firms. Together with Ian and Finola she has recently co-founded Trim Archaeology Projects Ltd. 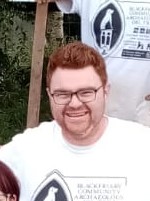 Mark McConnon is a professional archaeologist specialising in post-excavation processing, particularly ceramics. Mark graduated in 2018 with a BA in archaeology and history from Dundalk Institute of Technology. His thesis focused on an archaeological and historical landscape study of the Louth Hall Townland. Mark has worked with the Blackfriary project since 2015 as well as many other commercial archaeology projects since graduating. His research interests lie in artefacts, archaeological landscapes and local history.

Jane Robinson joined the team as office administrator in 2019 with a background in office management, administration and accounting. Jane has deep interest in community heritage and archaeology and manages many of our community events with the public. Jane also has responsibility for managing the excavation archive and logistics during the digging season.